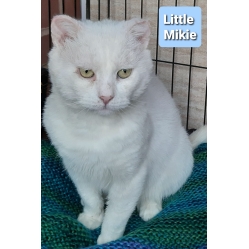 Little Mikie
Lovely Little Mikie had been living rough as an entire tom cat within a hospitals grounds, unfortunately he is FIV+, so needs to be indoor only, or with a catio or enclosed garden only - he does like other cats, so other FIV+ cats at the address would be fine. Due to his colour, he had cancerous changes on the edges of both ears, and the tip of his tail had been injured at some time and would not heal, so he has had his ears trimmed all round to remove the cancers, and the tip of his tail removed as it was necrosed.  He was a very sad young man at first, but now he rubs round for fuss and food all the time.  He is gorgeous and has put on loads of weight, and looks like a perfectly healthy young cat, you would not know he had the virus.  He would benefit from a home with a catior, though would be just as happy with plenty company in a flat or house.  Please see beyond his FIV, he deserves a new life, and could live to be an elderly chap in the right home
Information
When contacting us, please mention that you found us through our Cat Chat Homing Page - thank you!