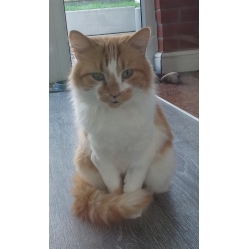 There are many cats there living in awful conditions and Bernie was one of them .  Bernie had previously been trapped but released on the  instructions of another rescue.   A lady who works nearby has been kindly feeding these cats and contacted us to relocate them due to building works .  We took Bernie to the vets and it turns out this lovely boy is fussy and friendly albeit vocal .

Bernie has been castrated , tested for FIV/FELV , flead and wormed .

We are looking for a home for Bernie with a catflap with access to a good,sized garden .  As he is not used to traffic we also require no busy roads and  a quiet area.  Bernie is not used to children, .  We are being extra fussy with Bernie as he has had an awful experience and deserves the best .
Information
When contacting us, please mention that you found us through our Cat Chat Homing Page - thank you!