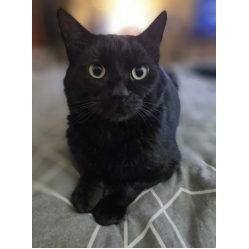 Jackson
Ready to be reserved...

Jackson arrived into our care in July, due to being a long term stray without a home. Sadly no owner came forward for Jackson, so he was transferred for adoption.

Jackson is a handsome lad, who is now confident with his foster carer. He can be nervous at first, and would only accept attention on his own terms. Since being neutered, and getting to know that his foster carer won't hurt him, he has now flourished into a lovely boy – his foster carers says that if she didn't know, she would have thought he had been swapped with another cat!

Jackson now follows his foster carer everywhere, she can't get any peace with him! No matter where she goes he is right next to her, and he even loves cuddles in bed. He is so thankful. Jackson is ok, with other calm cats, but not tested with dogs.

He has just received his first vaccination this week (6th Oct), so once he receives his second vaccination he'll be ready to leave for his new home (around the end of this month / start of November).

Jackson is looking for a quieter household with no young children, and a understanding owner.
Information
When contacting us, please mention that you found us through our Cat Chat Homing Page - thank you!