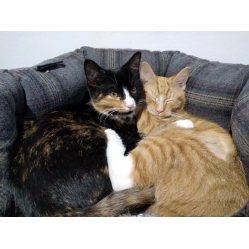 HARLEY & CASHEW
Harley and Cashew are two lovely girls seeking a furr-ever home together.  They are about 9 months old and are neutered and microchipped. They aren't full sisters, they likely have the same dad but Harley is about a week older.

They were rescued on the same farm at the same time and have lived together ever since they were around 5/6 weeks old.

Harley (tortie) is very confident and mischievous. She always wants to know what you're doing and she just loves attention. She will play fetch with her little rattley mouse repeatedly. If I’m trying to make dinner and not throwing it enough then she will drop the mouse in my food, don’t ignore her when she wants to play with mousey!

Cashew (ginger) can be shy with new people but I don't think it would take her long to build up trust with someone new. She loves to lay in my lap and makes a really cute squeak when she wants you to notice her.. Sometimes she gets jealous if she sees you giving someone else attention, even if she's already being stroked, she will go push my hand off the other one as she just loves her head rubs.

Harley and Cashew play fight a lot but it never gets too aggressive. Harley has always been the mum/leader of the group but she seemed to gain the biggest bond with Cashew. Although Harley is confident with most people, they still need a fairly quiet home because of Cashew shyness around new people. Harley has so much energy, she would benefit from having the option to go outside once settled in her surroundings so you will need to live in a cat safe area.
Information
When contacting us, please mention that you found us through our Cat Chat Homing Page - thank you!