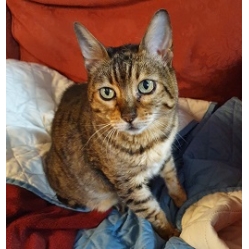 She is neutered, vaccinated and microchipped.

Cleo has no known medical conditions.

She is very much a 1 person cat, very affectionate once she accepts you; loves to be warm, playful when in the mood.

Cleo's owner says....
I have inherited Cleo from my mother who adopted her as a rescue cat after being very badly treated as a breeding female which has led to a general mistrust in humans. I live in the family house on my own but work at sea so Cleo is often on her own for weeks on end; in late November I will be away for 5 months which will be too long for her to be alone. I have a cleaner who comes in 3 times a week to check on Cleo which is only possible as Cleo only eats Royal Canin Siamese adult cat food, she has never jumped onto a work surface or showed any interest in human food. Therefore I know that only 2 x 10kg bags are eaten a year.
I would suggest that Cleo is not suitable for a home with any other cats, dogs or children; she has always been the boss in the house and guards the garden as her own fiefdom.
For years Cleo did not accept me as a friend when my mother was alive but it has been 15 months on our own and Cleo has become very affectionate, when I return from sea she meows for up to 2 days following me around everywhere including the garden where she supervises the work! She is a very bright intelligent cat who senses when things are not correct.
I will miss Cleo terribly but in my opinion I am being unfair to her by leaving her alone for long periods of time.

Adoption fee to be discussed with owner.
Information
When contacting us, please mention that you found us through our Cat Chat Homing Page - thank you!