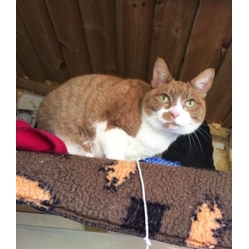 GYPSY is a 7 year old ginger and white cat who really really needs a friend right now. She has been in our care since last December and in spite of our best efforts we just haven't found the right home. Gypsy had been living as an outside cat . It isn't clear how long she had been surviving as an unloved stray but in Spring 2019 a family discovered she had been sleeping in their shed for some time. She was very thin and so they started to feed her and gradually she became more friendly and would have moved into their house had it not been for their small dog who wanted to be friends with her, but she had other ideas. Realizing that Gypsy needed her own humans, she was handed into CP care. She is a complex cat who needs an experienced cat owner to take her on. She can be loving and affectionate but also unpredictable mostly she just swears but can lash out if she thinks liberties are being taken. But she is always very anxious and shamefaced after any such incident. We do feel that being penned, even a a very spacious one with outside space is part of the problem.

We wouldn't home Gypsy with dogs or children but given enough space she may be ok with a laid back male cat. Ideally she needs somewhere with a conservatory or garden room where she can start her new life and then be gradually introduced to her new surroundings and the outside world. She would like to have more freedom and shows every sign of being a good hunter.

We know there is some  one out there prepared to take on a challenge like Gypsy and that with the right handling she will become better mannered and more affectionate. We just need to find that person.

Please phone Gill on 01749 850660 to know more about Gypsy. Clearly life has not been kind to her in the past and she just needs some one to help her to trust humans again.
Information

Gypsy
When contacting us, please mention that you found us through our Cat Chat Homing Page - thank you!