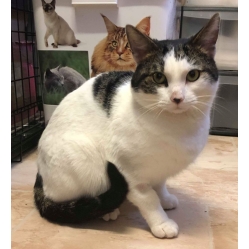 Dennis arrived with us during the storm, hence his name.  He had been a long term local stray.  He was very frightened when he first came into us and not wanting to interact with humans at all.

Dennis has changed so much in the short time of being with us.  He will now happily chat with you and approach you for attention.  He will accept a head bump and scratch behind the ears.  But he is also wanting his space and too much interaction he does not like and will lash out with either teeth or claws.  We have noticed he is quite hand shy, so may be reacting to something from his past.

Dennis has been completely non reactive to other cats, but not so keen on dogs.  He did not react to a dog in the vets while in his carrier, so a dog that would ignore him, we feel could work.

Due to Dennis being a long term stray and with his nature we feel an outdoor home would suit him best.  Either a farm or stables.  In time he may want more interaction with people, but at the moment not.


Do you have room at your farm or stables for me?

Currently being fostered in the GU35 area.

Dennis is only 2 ½ yrs old, and will be castrated, vaccinated, microchipped, flea & wormed before being re-homed.

Applications for his adoption are now being accepted.