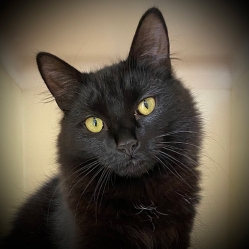 Fluffy-Teddy
I came from a street where Willows rescued TEN cats.... 10 cats.

My mammy and Aunty were left behind by their horrible humans, unutered. So the kittens would have kept coming had Willows not helped.

I made it to the shelter at five months old and just hid in my igloo. I was so terrified and hissed. Slowly I got used to the kind volunteers and eventually I progressed to a ‘big boys’ open-top bed.

Turns out I LOVE being touched… once I get over being approached by a big human hand.

I’m with Aunty Pauline in foster care now and have a whole playroom to myself.
I will always have a nervous side because of my time living outdoors as a stray from birth albeit with a few kind humans feeding me and my siblings.

I’m neutered now,  so ready as I’ll ever be for my forever home. That needs to be a settled human or two where there wont be any babies ever. I probablh won’t cope with upheavals in life so no young humans who’s lives will change a lot in my 16+ years of life.

Paws faithfully
Fluffy-Teddy
Information
When contacting us, please mention that you found us through our Cat Chat Homing Page - thank you!