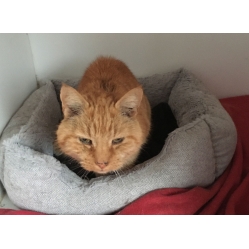 Ginge
This dear boy has had at least three homes.  I came across him recently, quite by chance as he was sitting on a lawn of somebody I know, as apparently he is unwanted yet again and spends a lot of time there. Previous 'owners' and this word is used very loosely, have never been serious about wanting him.  When other animals or children have taken centre stage in their lives, this dear boy has been pushed out in different ways, including literally. It is thought Ginge is around seventeen years old.  The lady I spoke to about him really feels he needs a proper, loving home and I couldn't agree more.  We both feel that the person who has basically thrown him out would be really happy if this were to happen and this would definitely be checked with them if ever we found a suitable home.  (UPDATE  The very young male 'owner' now says he is not his cat and never has been). To think of this dear boy, who came to me, a total stranger, for strokes with no hesitation, being able to enjoy the rest of his life in real comfort and being showered with love and affection with everything he needs, brings tears to my eyes.  It's the least he deserves.  He is adorable.  Ginge is now in the direct care of LPCR.  We are just getting used to each other but he remains very friendly and very chatty too.  It really is truly humbling to see him now, apparently feeling settled and secure with his own little safe haven to enjoy.  It's a great opportunity too to get to know him better which, hopefully, will help to determine what kind of home would suit him best.  He is okay here, and of course really welcome for as long as is needed, but a proper home of his own would be wonderful and pretty special for this very, very dear boy.
Ginge has now completed his vaccination course so is ready to go to his own home.  We have everything crossed for him.  The vet feels that he is a typical older cat and doing well and looking as expected.  We don't know all the details of his background but we do know it is at least many years since he had his own loving home and owner, if ever really.  Ginge is incredibly easy to love, putting it very mildly indeed!

FURTHER UPDATE
Though Ginge did not give me any particular cause for concern, he has recenty had blood and urine tests done, only bearing his age in mind and for reassurance for any warm hearted, caring potential new owner.   He has been diagnosed as having kidney disease, though outwardly nothing has changed.  We are now trialling some diferent renal foods and appear to have found some that he likes so he is tootling along nicely.  He really does live in hope that he can enjoy his retirement years, living in comfort and being treated like royalty in his very own home, which is probably only a very, very distant memory to him.  He's welcome here as long as he needs us but he is liviing in a pen, which can't be compared to a proper home.  I feel so much for him, we're both of the older generation, though I wish I only had a sprinkling of grey hairs.

If you are even vaguely interested in having a general chat about this needy, very deserving boy, do get in touch, with no commitment at all.  Whatever happens, thank you for reading.  [email protected] / 07477926973
Information
When contacting us, please mention that you found us through our Cat Chat Homing Page - thank you!